As collaborative lawyers, we have a tendency to rattle on about the emotional, financial and time costs of litigation. You have caught on to our ploy; we want you choosing us as your lawyers, not the litigator down the street. If you think that’s our only motive, you might think twice after reading this post. 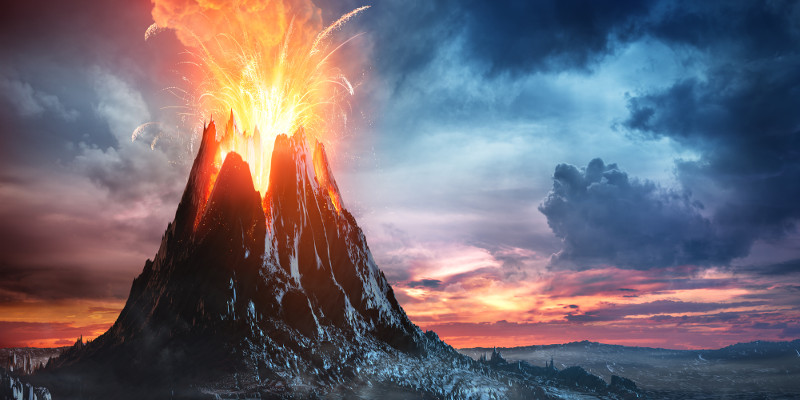 The beauty of case law is that it gives us a smorgasbord of detailed, real-life examples of how you can end up perched precariously on the edge of a volcano, handcuffed to your ex, watching each other throw your life savings into the molten lava, one hundred-dollar bill at a time, five years after you got divorced. How’s that for a visual?

I’m not sure how the parties felt in Slongo v. Slongo (2017 ONCA 272), but it’s a case example of something we strive to avoid in collaborative law: a drawn-out court experience following a marriage breakdown.

In Slongo, the parties had a 23-year traditional marriage, where the husband worked outside the home and the wife did not, but rather stayed home to manage the household and look after the couple’s three children. After they separated, the parties were able to reach a separation agreement that dealt with matters like equalization of property, child support and spousal support. Sounds good so far.

As part of the property equalization process, the husband’s pension was valued. As you may know, a pension valuation is based on actuarial assumptions, and is not an exact science. The value of the pension at separation was accepted by the parties, and the equalization was carried out at that time.

Four years after the separation agreement was signed, the husband took an early retirement package from his employer, electing to receive the commuted value of the pension in lump sum payments over the course of a few years. The commuted value was considerably more than the value attributed to the pension at separation. The payouts meant that the husband’s yearly income would be considerably higher than was contemplated in the separation agreement.

In April 2013, the wife brought an application to court regarding (among other issues) the amount of spousal support payable to her, based on the husband’s early retirement and increased income. Without going too far into the procedural weeds, this resulted in several court appearances and more than one expert report from more than one expert, before the motion judge made a determination about the new amount of spousal support that should be paid (he agreed that there should be an increase based on the part of the pension that was not equalized at separation, but he decided that it shouldn’t follow the spousal support guidelines). The motion judge issued his reasons two years after the initial motion was filed, in March 2015.

The parties did not agree with the motion judge’s ruling, hence the court of appeal decision that is the topic of this post. As an illustrative recap, we’ve now heard that the parties negotiated a separation agreement (which included a pension valuation), fought for two years about the actual value of the pension and what that meant for spousal support, and decided that it was worthwhile to continue fighting after a judge made a decision in their case. If you’re thinking about the money-volcano again, I don’t blame you.

The wife was successful in part of her appeal. The court awarded her spousal support in the range she ultimately argued for. She was awarded $12,000 in costs for the appeal, less than would have been awarded had she been successful on all issues argued. The decision was issued in April 2017, four years after the initial motion was filed, and almost nine years after they signed a separation agreement. We don’t know how much she paid in legal fees, but we can assume her husband paid at least as much as she did.

How could this have been different?

The truth is, you can never be one-hundred percent sure. What I do know is that people who sit down together at a table with their lawyers and their neutral financial professional to walk through and agree on the meaning of each term of an agreement (separation or otherwise) are more likely to agree on the meaning later on. People who use a neutral financial professional to coach them through the implications and potential pitfalls relating to their property equalization will have a better understanding of their finances than parties who rely on their individual lawyers alone. People who start out in a collaborative process and learn that way of communicating are likely not going to use the court as their first choice of conflict resolution methods if a new issue pops up.

People who are able to resolve their issues collaboratively do not spend four years in court.

So, do I want you to come and see me instead of my litigator friends? Yes, I do, but it’s for your sake more than mine.

Best4All is an association of lawyers, financial advisors, and counselors who have received specialized training in a multidisciplinary collaborative practice. We use a collaborative approach as a tool to help families in the Kitchener-Waterloo and Cambridge, Ontario area who are in the midst of separation and need professional assistance.